While many of these control packages have been built with industrial temperature controls (see examples at left and right) there are many versions of these systems that are available with programmable logic controls (above).

In their simplest form, the complete electric locker packages typically look like the NW-25100 package shown at left. The package includes HVAC controls at the top, 120 volt circuit breakers in the middle of the package, and 480 volt circuit breakers at the bottom. This is an example of having everything that is needed all in one package that can be put into an existing passenger car electrical locker.

For dome cars, certain lounge cars, dining cars, and other cars that have two distinct areas, we have produced the NW-25200, pictured on the right. This is a package very similar to the NW-25100, but with two zones of HVAC controls.

It is very common for customers to request a generator control or a DC control package be added to the above packages. There are several methods of doing this, depending on the shape and size of the existing electrical locker.

Variations of these popular designs have produced a wide assortment of custom locker packages that are designed to meet specific requirements of particular customers. Here is an example of a NW25-100 built with the circuit breakers beside the HVAC control, and a generator control mounted under the HVAC control:

There are a number of cars out there that are fairly satisfactory the way they are, except for the early generation HVAC control system on these cars. For replacement of the standard Amtrak first generation HVAC control, Northwest Rail Electric has produced the NW-603-INT system, which is designed to plug into the same connectors as these old, unreliable units.

If the car is equipped with a generator, normally the generator control is in the electrical locker, right next to, above or below the HVAC controls and circuit breakers.

Our generator controls may be broken into two basic types:

These generator controls generally also include the switch gear required to perform control of the three phase power coming out of the generator. In certain cases, however, Northwest Rail Electric has also provided generator controls with terminals or connectors to interface to a set of circuit breakers and contactors that already exist in a passenger car electric locker. This prevents the passenger car owner from having to purchase the expensive heavy power system components. 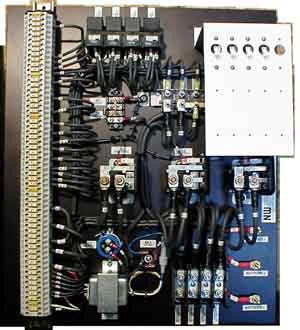 While today's passenger cars no longer require the 1000 amp 32 volt DC systems they used to have, there is still some need for battery power and other direct current circuits. In most simple passenger cars, the DC control system built in to such packages as the NW-25100 (above) provide the required DC control circuits. In cases where a more complicated control system is required, Northwest Rail Electric has provided suitable control systems. These control systems depend on the needs of the car, and may be custom systems or one of the standard DC packages we have developed. For more information about our DC Control Packages than this brief summary provides, please see our DC Controls section. Here are a few examples of DC packages that have either been created as a stand-alone panel, or added to the NW-25100 series of locker packages:

From time to time, we produce an NW-25100 type package with a generator control, and direct current control or battery isolation system combined on a single panel. 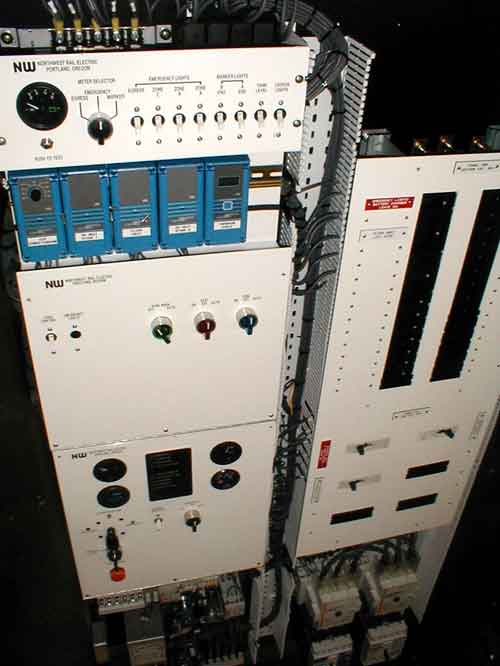 Our true custom passenger car electrical systems are built to suit various unique needs. These have been varied in size, shape, and complexity, so that we have an Entire Web Page devoted to our Custom Packages with a number of photos of a selection of the railroad passenger car systems we have made over the years. The two section panel pictured below is only part of this package. 480 power from the generator or HEP is from the bottom, and feeds the 480 volt circuit breaker panel. The 208v/120v panel is on the right. The cord that you see coiled around the contactors will be used to connect this part of the system to the control panels once the system is installed in the car. It has a connector on the end for ease of installation.

The package shows extensive 480 volt circuit breakers on the left, including HEP Main and Generator breakers, various 480 volt breakers for such loads as the HVAC system and the oven in the kitchen, and part of the system for automatically starting the generator if the HEP system fails. On the right there are a number of 120 volt and 208 volt breakers for a number of lower voltage loads. The HVAC and generator control systems are on a third panel that isn't pictured.

It is difficult to describe these complex systems very well in general terms, since each is very unique. More is described, however, on our Custom Locker Packages web page.

Over the years, Northwest Rail Electric has produced a number of systems involving Programmable Logic Controllers (PLCs). There are a wide variety of packages that have been produced that perform a number of different functions. Each of these systems have been unique in their own ways. For more information, please see our PLC Systems web page.