Direct current systems used in railway passenger cars have a a history spanning some 140 years, with the first electric lighting systems appearing in 1881. Such systems have included everything from simple battery powered lights to 32 volt DC air conditioning systems, marker lights, and ditch light systems. Today, with the conversion of most cars to head-end power, the requirements of these systems have changed considerably, but there is still a need for various DC systems on passenger cars.

Northwest Rail Electric has produced a wide variety of DC systems over the years. At the simplest, these systems involve a relay to turn on the emergency lighting system when the HEP system shuts down. More complicated systems involve battery charging, circuit breaker panels, and frequently some sort of voltage indication. Even more complex systems may require DC-DC conversion to go between several different voltages. Northwest Rail Electric has produced a number of direct current control systems, including battery charging, emergency lighting and DC-DC systems that are designed to help our customers work with an assortment of voltages in a number of different applications.

Most of the time, these DC systems are part of a larger electrical locker package for a complete passenger car electrical system.

The NW-DC100 is the most popular type of DC control system that gets added to Northwest Rail Electric electrical locker systems. It is designed to be an easy option for the NW-25100 and NW-25200 locker packages. The version illustrated above is typical of recent versions of the NW-DC100, with several circuit breakers and digital DC volt meter that is activated by pressing a button to connect it to the system battery.

The NW-DC100 pictured above is designed for a more complex system. Here, there are three separate battery systems: generator, marker lights and emergency lights. A switch is used to select which of these systems the volt meter is measuring. It has circuit breaker switches for turning on the various systems as well as serving as the circuit breaker for those systems. In this case, the system was mounted on a hinged control panel similar to what is usually done for the HVAC control section of the NW-25100 electrical locker package.

The interior of the NW-DC100 panel includes a number of terminals to connect it to the rest of the system on the car, as well as several relays.

The NW-DCLT-BP-3, pictured above, is a similar system to the NW-DC100 pictured above it, with three different battery systems that are normally separated and the DC volt meter that can be switched between the three. In this case, the most obvious difference is the lack of the hinged panel. The devices below the control panel are battery separation relays that charge all three batteries if one of them is being charged, but otherwise keeps them separated so that no one system is capable of completely discharging all of the batteries simultaneously.

Note that many of the circuit breakers have been labeled with engraved tags, and where appropriate space has been left for additional future tags. All of the circuit breakers will be visible through the glass fronted enclosure when the system is installed, so it doesn't even have to be opened to determine if a circuit has been turned on or a breaker tripped. The display screen, processing system, USB port (circular connector to the left of the display screen) and certain other components located on the second panel from the top were required by the customer to be covered while in motion, and thus the secondary cover for those systems. The blank covers over the spare circuit breaker positions have not yet been added in this view. The white adhesive paper visible on the door protects the glass part of the enclosure door until the system is installed. Quite a lot of custom sheet metal was involved in positioning the various types of circuit breakers and the display system at a uniform height.

This custom DC control system includes a number of solid state DC-DC converters for taking 72 volts DC and converting it into various other voltages for use on the car for 12 volt lighting, 32 volt control systems for a previously existing 32 volt DC system, 24 volt DC for a control system that was unavailable in any other voltage, and 12 volts DC for several low voltage systems. The middle of the panel is the DC circuit breaker panel for all 72 volt, 24 volt, 32 volt and 12 volt circuits. The top of the panel includes the car's 120 and 208 volt AC circuit breaker panel. All of the circuit breakers are labeled with engraved labels. 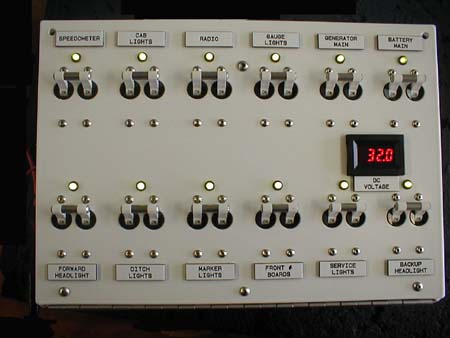 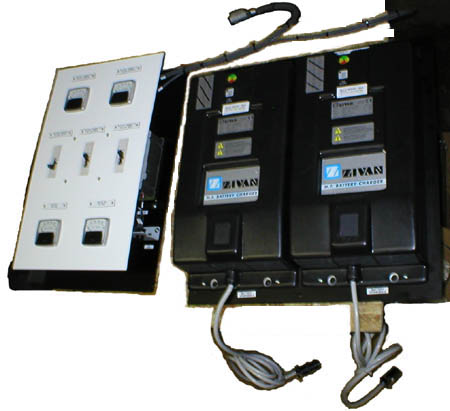